Pumping of He atoms: When electric discharge is passed through the gas mixture of He and Ne, electrons are accelerated down the discharge tube in which mixture of He-Ne is placed. These accelerated electrons collide with helium atoms and excite them to higher energy levels (let us say F2 and F3). 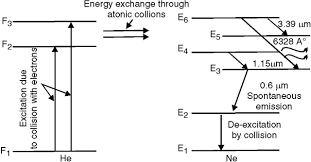 These levels happen to be Metastable and thus the He atoms spend a sufficient amount of time there before getting de-excited.

Achievement of population inversion of Neon atoms: Some of the excited states of Ne atoms correspond approximately to the same energy of the excited levels F2 and F3 of He. Thus, when He atoms in levels F2 and F3 collide with the Ne atoms in the ground state E1, then energy exchange takes place and this results in the excitation of Ne atoms to the levels E4 and E6 and de-excitation of the He atoms to the ground level F1. As the helium atoms have longer life time in excited states F2 and F3, thus this process of energy transfer has high probability.

Therefore, the electric discharge through the gas mixture continuously populates the Ne excited levels E4 and E6. This helps to create a state of population inversion between the levels E4 (or E6) and lower energy levels E5 and E3. Therefore the purpose of He atoms is to help in achieving a population inversion in the Ne atoms.

Achievement of laser: The following three transitions will occur:

The excited Ne atoms drop down from levels E3 to E2 through spontaneous emission and this process will emit a photon of wavelength 0.6 μm. As the level E2 is also Metastable, there is a probability of excitation of Ne atoms from E2 to E3 leading to quenching of the population inversion. To eliminate quenching, the narrow discharge tube is used because Ne atoms de-excited to level E1 from E2 through collisions with the walls of the tube.

Note: In next article, I will explain the output, uses and drawbacks of He-Ne laser. Till then, try to make the working diagram. In case of any problem in this article or any other physics article, post in the comment section

Note from winnerscience: If you want the e-notes of all the laser  articles that will include the basics of lasers like stimulated absorption, difference between spontaneous and stimulated emission, Einstein  Coefficients, properties and applications of lasers, complete construction and working of lasers like Ruby laser, He-Ne laser, Carbon dioxide laser, Nd:YAG laser, dye laser, semiconductor laser, holography and additional articles of Q-switching and mode locking, then please contact winnerscience@gmail.com. You can post your queries also there.