In the last article, I have explained the basics of semiconductor. Today I will explain the construction of a semiconductor laser.

Pumping Source: Forward biasing is used as pumping source. The p-n junction is made forward biased that is p side is connected to positive terminal of the battery and n side to negative. Under the influence of forward biased electric field, conduction electrons will be injected from n side into junction area, while holes will enter will enter the junction from the p side. Thus, there will again be recombination of holes and electrons in depletion region and thus depletion region becomes thinner. 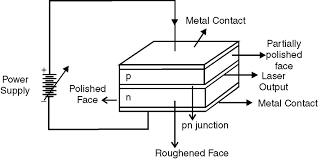 Optical resonator system: The two faces of semiconductor which are perpendicular to junction plane make a resonant cavity. The top and bottom faces of diode, which are parallel to junction plane are metallised so as to make external connections. The front and back faces are roughned to suppress the oscillations in unwanted direction.

Note: In next article, I will explain the working. Till then, try to make the construction diagram. In case of any problem in this article or any other physics article, post in the comment section.

Note from winnerscience: If you want the e-notes of all the laser  articles that will include the basics of lasers like stimulated absorption, difference between spontaneous and stimulated emission, Einstein  Coefficients, properties and applications of lasers, complete construction and working of lasers like Ruby laser, He-Ne laser, Carbon dioxide laser, Nd:YAG laser, dye laser, semiconductor laser, holography and additional articles of Q-switching and mode locking, then please contact winnerscience@gmail.com. You can post your queries also there.

One Reply to “Construction of semiconductor laser”